Todd Kromann and I facilitated a workshop at Agile2014 on the subjects of Dude's Law and Weighted Shortest Job First (WSJF). We helped the group understand how to apply relative estimation not only to Cost of Implementation (size, expense, complexity, etc.) but also Cost of Delay (urgency, risk, dependency, compliance, etc.). We used the modified Fibonacci sequence most often used for Story Points to quantify both of these numbers, which was done by table teams. Each feature's Value Index, used to prioritize, was determined by its Cost of Delay number divided by its Cost of Implementation number. (You can get a soft copy of the handout we used here).

At the end of the workshop we had, as we usually do, a team whose features included a tie. This sometimes happens because they have the exact same Cost of Delay and Cost of Implementation numbers. More often, this happens because the numbers used in the equation are different, but the division comes out the same. One of the questions that invariable arises is: which feature should be prioritized first?

In theory, it doesn't matter - the ratio of urgency to expense is the same. Once both are implemented the ROI is equal. The decision of which to do first should be determined by the organization. In reality, I believe that the smaller feature should be implemented first. I've drawn up an example to illustrate. 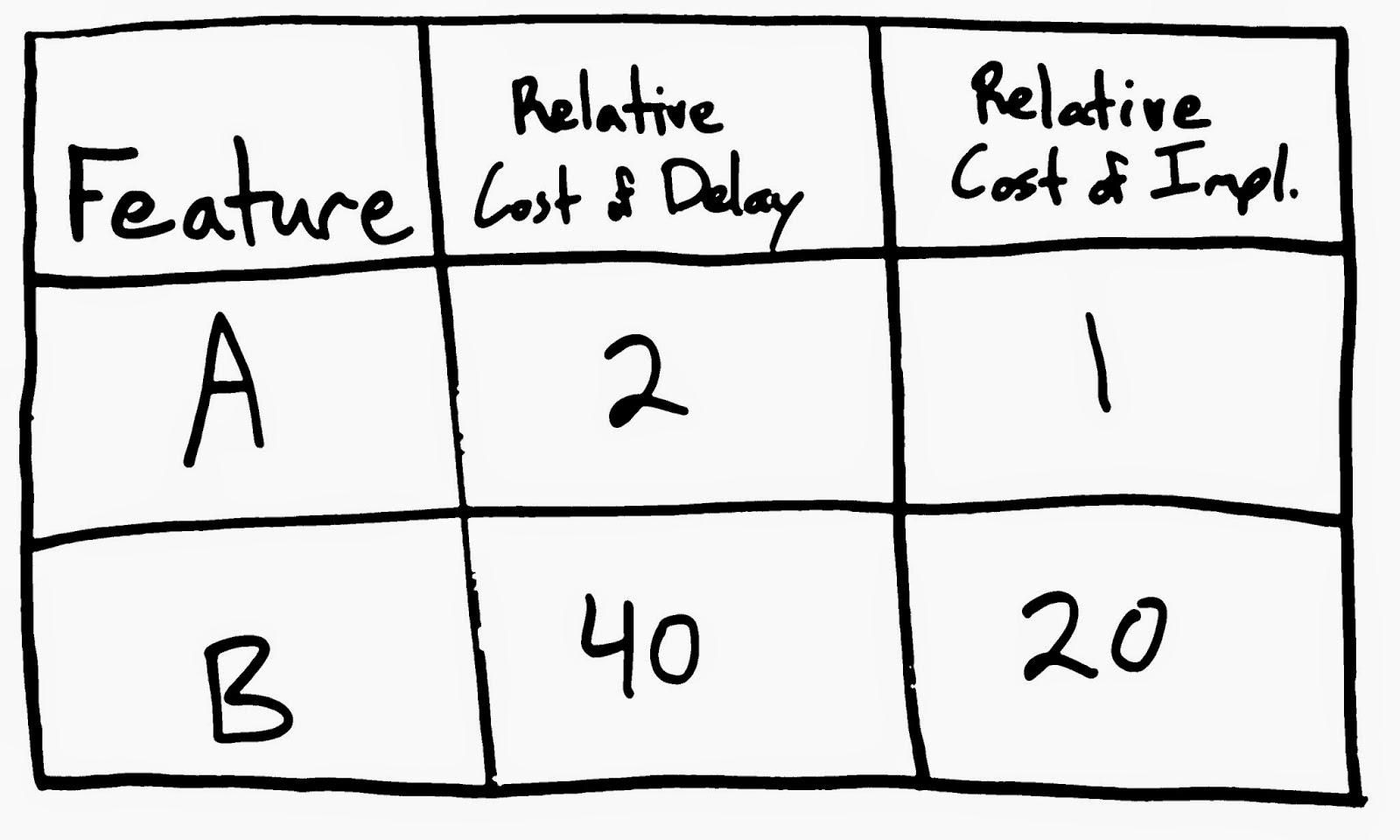 In this scenario, we have two features, A and B. Feature B is 20 times more expensive than A, but also 20 times as valuable. Let's look at what would happen if we implemented Feature A first. 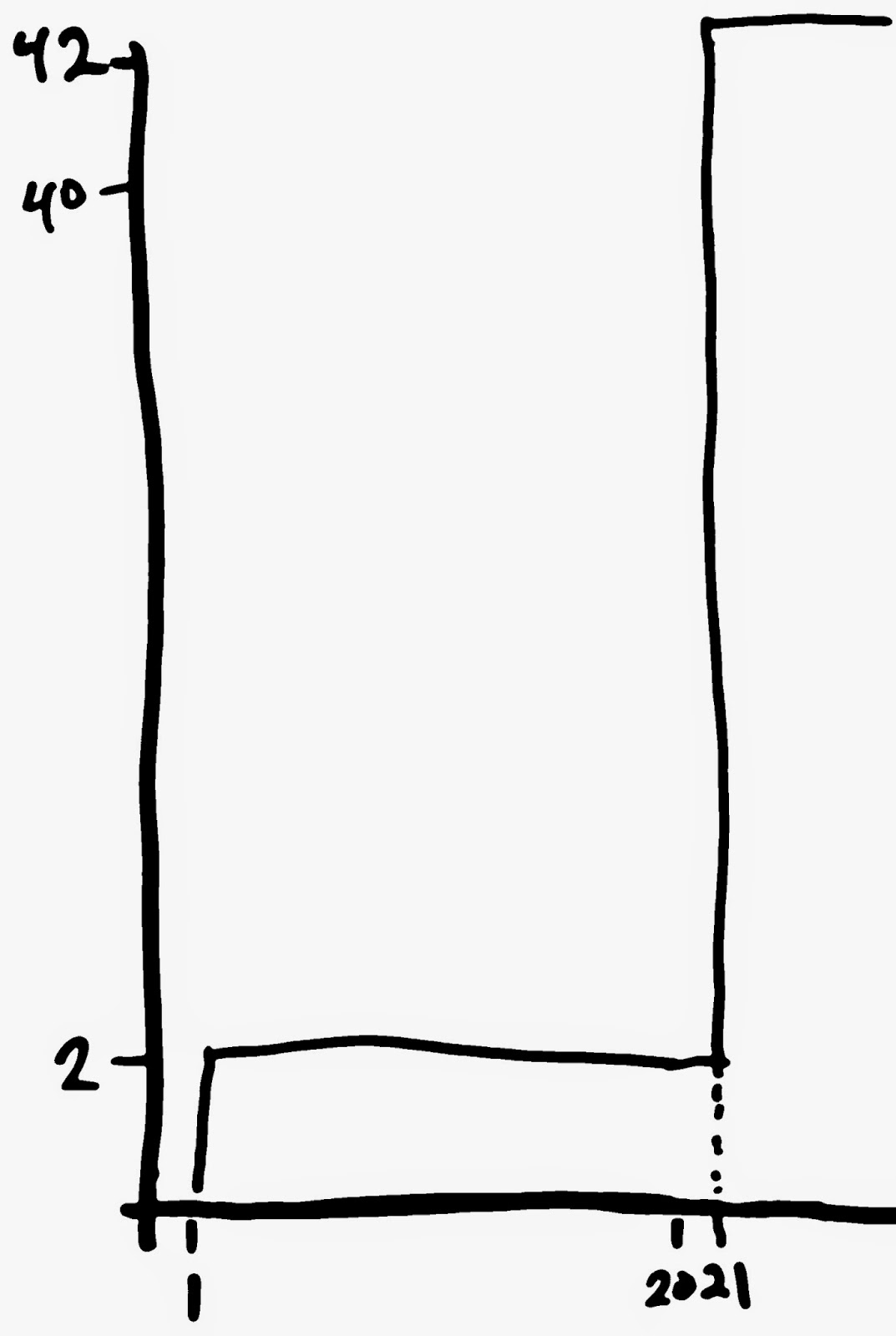 As you can see, we get a little value very quickly and significantly more after a delay. If we say that the y-axis represents millions of dollars and the x-axis represents quarters of the year, then we get $2MM/quarter after our first three months with no increase until five years later, when our quarterly revenue jumps to $42MM. By the end of our 22nd quarter, we will have earned $82MM.

Now let's see what it would look like if we did Feature B first. 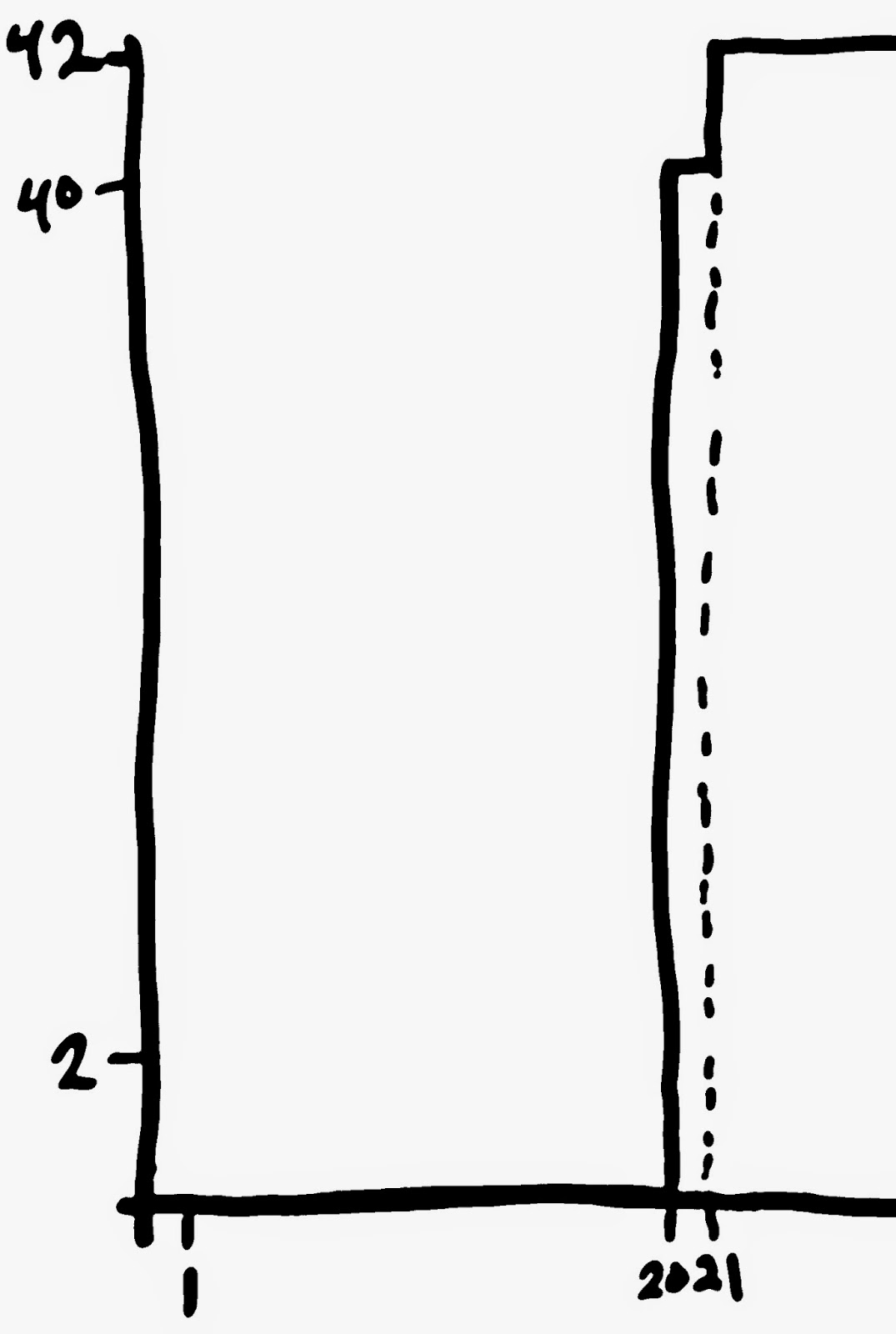 Using the same axis values as before, we're basically going five years without any revenue. However, after five years of development, our revenue jumps to $40MM/quarter, with a $2MM/quarter bump immediately after. Just like before, we will have earned $82MM by the end of our 22nd quarter and will be earning $42MM/quarter thereafter.

So which one's better?

Do you really want to go five years without bringing in any revenue? Of course not! You'd much rather start capitalizing on your work after only one quarter's worth of work. Not only do you now have some money in to fund yourself, you're learning from the market based on how they use what you've released. This new-found knowledge will improve the quality of subsequent releases.

The reality is that, although the former option is better than the latter, neither are great. What you should do is, while you implement Feature A, break down Feature B into smaller components. It is highly unlikely that all of these components will have a 2:1 ratio of CoD:CoI. You'll identify which sub-Features provide the highest relative ROI and implement them as soon as you finish with Feature A. There may be sub-Features that you never get around to implementing because the value doesn't justify the expense. You can instead move on to a new Feature and begin decomposing and prioritizing its pieces. By the end of your 22nd quarter, you'll end up bringing in much more than the $82MM/quarter number that the two options above afforded.

That's my take on what to do in the event of a WSJF tie. What would you do?
Posted by Unknown at 9:10 AM